Nepal earthquake of 2015, also called Gorkha earthquake, severe earthquake that struck near the city of Kathmandu in central Nepal on April 25, 2015. About 9,000 people were killed, many thousands more were injured, and more than 600,000 structures in Kathmandu and other nearby towns were either damaged or destroyed. The earthquake was felt throughout central and eastern Nepal, much of the Ganges River plain in northern India, and northwestern Bangladesh, as well as in the southern parts of the Plateau of Tibet and western Bhutan.

The initial shock, which registered a moment magnitude of 7.8, struck shortly before noon local time (about 06:11 AM Greenwich Mean Time). Its epicentre was about 21 miles (34 km) east-southeast of Lamjung and 48 miles (77 km) northwest of Kathmandu, and its focus was 9.3 miles (about 15 km) underground. Two large aftershocks, with magnitudes 6.6 and 6.7, shook the region within one day of the main quake, and several dozen smaller aftershocks occurred in the region during the succeeding days. On May 12 a magnitude-7.3 aftershock struck some 76 km (47 miles) east-northeast of Kathmandu, killing more than 100 people and injuring nearly 1,900.

The Party: Excerpt from the book “Ramchandra, the Child of the Himalayas

On April 24, 2015, we celebrated the twenty-second anniversary of the Sri Aurobindo Yoga Mandir.

Friends, families and visitors had come from the neighborhood and the city.

The children had prepared small dance and yoga performances.

All ages participated. There were also speeches. Many good things to eat were cooked. It was a celebration for the whole ashram.

Everywhere in Nepal, school starts between April 15 and 17. This is the new school year, after twenty days of vacation.

In the ashram, there is a little more than a month’s vacation because, due to the big festival on the 24th, all the children stay on vacation and the new school year begins for them around April 30th.

No one could imagine what would happen the next day.

Extract from the book “Ramchandra, the Child of the Himalayas

On the morning of the 25th, it was very windy, it was not at all like usual. The morning was particularly dark, very cloudy, and cold. It was a strange weather for the season.

Two very large trucks had come to deliver the hay for the cows, a lot of hay. It was a Saturday. In Nepal, it is the rest day of the week. All schools are closed. On this day, in the ashram, in the morning, we all do karma yoga together, before lunch at about eleven o’clock.

Except for four or five girls who were cooking, and those who were doing the organic markets in Kathmandu, the karma yoga on this particular Saturday was to unload the hay. The kids would put it in bags and some would carry them to the barn, others to the first floor of the school.

The trucks had arrived quite early. The work had started around 7:30. The whole ashram family was there, except for a few little ones who were playing.

By eleven o’clock we were almost done. There were a few bags left. We were getting ready to go to lunch. Many of the children were tired and all were hungry. And then a third truck arrived! It was amazing, because we had not ordered it. It had been requested by another person who, I don’t know why, didn’t want it. Since the driver, who knew us, had his load on his hands, he decided to come to the ashram to see if we wanted the hay.

Most of the children were unhappy; they thought they could stop. I wanted to unload the truck, but they didn’t want to. I felt it was important to do it right away, not to wait, especially since we were all already dusty. There was no point in going to wash and getting dirty again after the meal. Besides, the driver had a wedding to go to the next day and he asked me to unload him as soon as possible.

I went with what I felt and decided that we would unload the truck before we ate.

We had started unloading. We were halfway through. Everybody was in action. All of a sudden, it seemed like all the birds had flown away and were all chirping together. At the same time, all the dogs in the area started barking. It was a real cacophony! But none of us paid any attention to it. Maybe because of the concentration to work fast and the disappointment of the third truck to unload, when everyone thought they were done? I don’t know. And then the earthquake happened!

Excerpt from the book “Ramchandra, the Child of the Himalayas

I immediately understood what was happening.

I wanted to run, but it was jumping around so much that I was standing still.

I was worried about the children.

I wanted them all to get out.

But the sound underground was so loud that no one could hear me.

There was a lot of panic. Many children started to cry. The older ones were also shouting:

– Don’t go to the buildings!

Everyone ran to the fields next to the Samadhi.

I was looking at the buildings. They were moving like flags. I immediately thought of all the people inside. I prayed that no one would get hurt. I didn’t know if there were still people inside.

Then the bricks of the big building started to fall. Luckily, my mom and the girls in the kitchen were able to run out quickly, as soon as it started to move, but I didn’t know that. It was really lucky. They were already far away from the building, when the walls under construction collapsed to the ground, four floors below.

When it stopped, there was a HUGE calm.

And then we saw the dust rising.

The whole valley was covered with a huge cloud of dust.

There was no electricity, no phone!

I had seen the barn move so much during the earthquake that I thought the cows were all dead. They were inside, tied up. From the foundation of the barn, a huge white dust came out.

We immediately looked to see if everyone was okay.

Then the first thing I did, as soon as it stopped, was to go to the barn. It seemed to be fine. But in the next two days, two cows died and three had abortions. The granary for feeding the cows was totally destroyed… the feeders too.

Luckily, no one was hurt. We were all very shocked, but all safe.

The third truck saved the lives of many children! Without it, they would have all gone to the dining hall in the big building. As the weather was quite good, they would have sat in front of the entrance next to the kitchen to eat, especially the older ones, as they often do. And that’s where all the bricks of the fourth and fifth floor walls fell.

In Nepal, more than twenty-five thousand buildings and more than three hundred thousand houses were destroyed or damaged.

In the ashrams, the toll, although not quite as dramatic, was nevertheless quite heavy.

The old house was half destroyed.

It has since been rebuilt. But it remains dangerous and children are not allowed to go there. It is planned to be destroyed for good.

But an idea is floating around that invites to make it a SAYM museum. Perhaps it will survive and be partly rebuilt and consolidated. The future will tell.

The building where the barn was located was so badly shaken in its foundations that it was forbidden to any person by the authorities.

A special and very expensive work had to be done to repair and consolidate the foundations.

Today, it is dedicated to the Ayurvedic hospital.

As a matter of urgency, the day after the earthquake, a new cowshed had to be built to shelter the cows.

The whole water system had to be rebuilt in the following days. This was very important, both for the people and the cows. All the solar systems to heat the water were also destroyed.

The meditation temple had many cracks. It remained as it was.

The roof of the newly built stone house was destroyed. Since then, wooden pillars have been placed in the middle of each room to support the new roof.

The main consequence of these events was the regrouping of the children in the available rooms. Thus, for more than two years, they sometimes found themselves up to 15 in a room where usually 3 visitors are welcomed!

5 years after these events, they are still 6 or 7 in certain rooms!

But the construction of the new guest-house will free up a dozen rooms that will be occupied. At the same time, the rooms on the 5th floor of the main building are being finished.

Many of the young women and men in the ashram will finally be able to enjoy an environment more appropriate to their age.

In addition to the destruction that generated a repair and reconstruction cost of more than 200,000 euros, financed solely by donations and support from friends around the world, the traditional income of the farms collapsed.

And this, especially since Nepal had to face for more than seven months, after these events, the economic blockade of India: no more gasoline, no more cement, etc. The prices were multiplied by five!

The economy of the Sri Aurobindo Yoga Mandir had to be rethought.

Thus, the Trek Agency was born!

Event tours were intensified… and integral yoga retreats were born.

The Sri Aurobindo Yoga Mandir did not receive any support from the Nepalese state.

It was finally the Indian Embassy in Nepal that financed the construction of the new school, via the Nepalese government. This did not make things easier. Thus, the 4th and last floor of the building, a large amphitheater, is still waiting to be built. 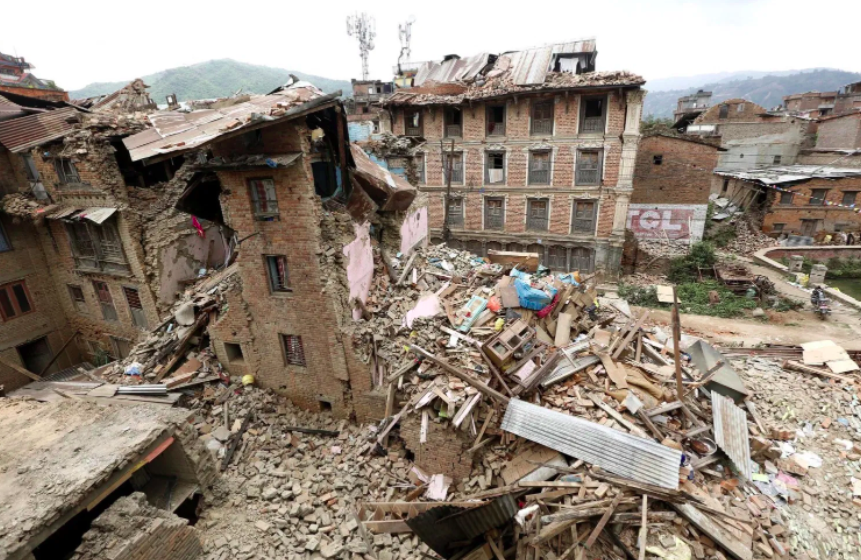